There are few architectural styles more emblematic of New York City than the townhouse. First built over 100 years ago, these buildings have withstood an ever-changing real estate market to become some of the most treasured and prized homes in the city. Today, buyers often look to balance the history of the NYC townhouse with sleek modernization. It is a tricky but rewarding process that calls for the insight of a skilled architect.

Are you on the hunt for a NYC townhouse property? If so, it is a good idea to consult an architect who specializes in this property type. They will be able to walk you through the essential components of townhouse purchasing, renovation and ownership — some of which I’ve detailed for you below.

Before you embark on the renovation of a NYC townhouse, it is important to understand the history of how this type of building came to be. Developers first built rowhouses during the Civil War, modeling them after English “terraces,” medium-density housing that originated in Europe in the 16th century.

Construction boomed through World War I due to two factors: Manhattan’s high land costs and a street grid pattern that created narrow lots restricting horizontal expansion. Smaller homes were built for artisans and merchants, like the ones still standing in the West Village. Grander rows appeared along Washington Square and Lafayette Street.

The building style quickly expanded to Brooklyn, the Bronx and Queens as the outer boroughs were linked to Manhattan through transportation and political consolidation. Speculative builders built quickly, varying the size — from two to four stories — as well as the amount of exterior ornament and the quality of the interior finish. The NYC townhouse became the de facto residential style across the city, prized for its privacy and yards at a more affordable price point than detached homes.

In New York City, real estate is always changing. That is also true of the townhouse — a high number were demolished following World War I and replaced with denser apartment buildings; others were broken up into single room occupancy or apartment units.

Despite that, you can still find the five original townhouse styles on display throughout the city. The rarest and oldest design, made of clapboard, was built between the 1700s and 1800s. (Clapboards were banned in the 1850s as a fire hazard.) Brick townhouses were erected in the 1800s and are still prevalent throughout Manhattan. Brownstones and higher-end, opulent limestone townhouses were built in the 1900s — you will find these homes in neighborhoods like the Upper West Side and the “brownstone belt” of Brooklyn. Finally, less expensive vinyl-sided homes built in the 1950s are located across Brooklyn and Queens. 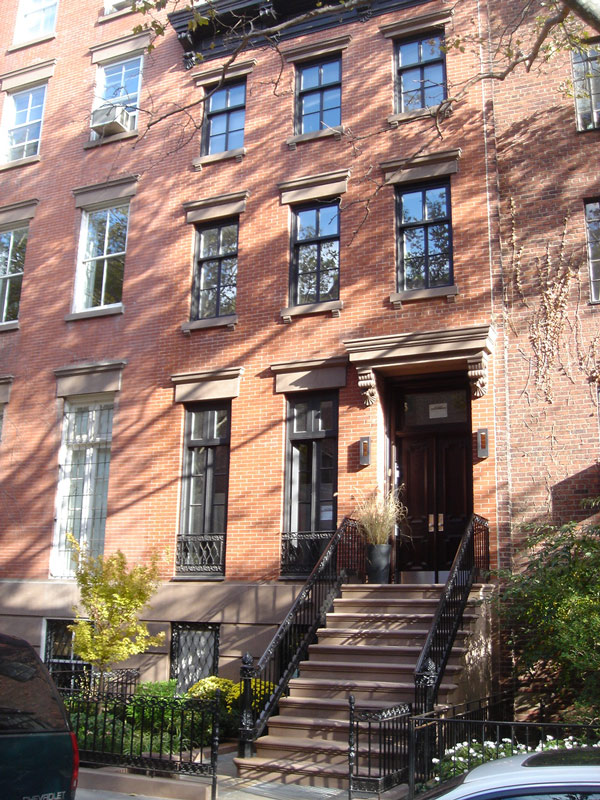 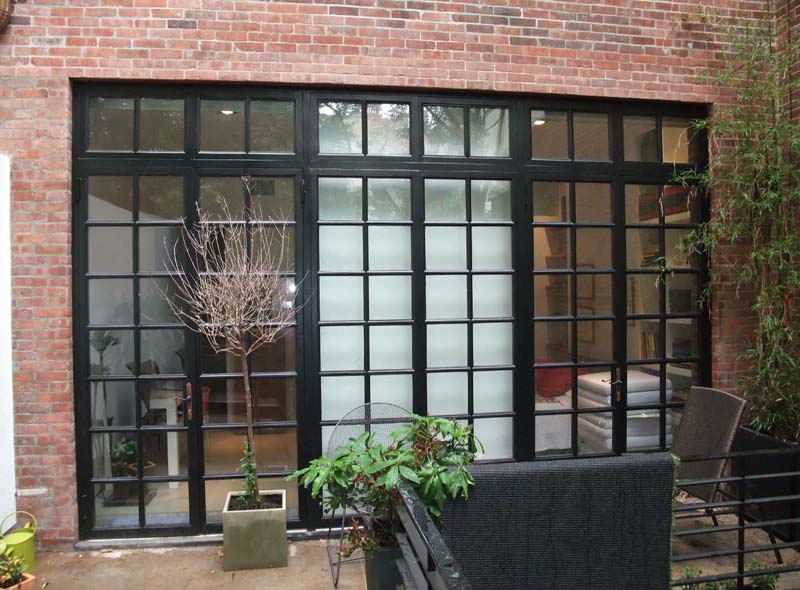 The original appeal of the NYC townhouse was its affordable price. Now, they command some of the highest prices in the New York real estate market. As opposed to a condo or co-op, buyers have their own private residential and outdoor space, a particular luxury during the COVID-19 pandemic. Townhouses also tend to have lower taxes, no maintenance fees, and can provide a source of income if homeowners convert the garden floor into an apartment.

Perhaps the real appeal is that when you buy a townhouse, you buy a piece of New York City history. The stately exteriors and stunning interiors, which showcase carved woodwork, marble finishes and details like parquet flooring and crown moldings, are what makes the renovation process complex. While townhouse owners have more freedom in renovation than a condo or co-op owner, the guidance of a specialized NYC townhouse architect is important.

Many townhouses are located within landmark districts, meaning any exterior changes will need the approval of both the Department of Buildings and the NYC Landmarks Preservation Commission. (The LPC Rowhouse Manual offers a sense of that process.)

Significant NYC townhouse renovations, like adding an extra floor, rear addition, or changing something significant on the exterior, will require your architect to make a presentation to the Landmarks Preservation Commission board through a public hearing process.

When it comes to the interior, major structural problems often arise in such old buildings. If your townhouse were built as a single-family home, for example, but broken into multi-family units, the structure likely suffered and would require costly investments.

Those are not the only challenges to prepare for. In some NYC townhouse alterations owners must treat asbestos and invest significantly in restoring original details of the home. There can be complications to seemingly simple fixes, like making a non-functioning fireplace work again or installing an HVAC system. Again, finding the right experienced architect, craftsmen and general contractor is key to avoiding headaches and unexpected costs down the line.

Given the intensive and careful nature of any NYC townhouse renovation, costs typically range between $200 and $300 per square foot. The most important thing to keep in mind before you invest in a renovation of a NYC townhouse, expect the unexpected! I recommend adding 10 to 15 percent contingency to budgets for interior or exterior issues that might come up.

Kohn Architecture is here to guide you through the NYC townhouse renovations process, including early planning, working with building codes, and zoning, securing approvals from city agencies, and securing the right team to embark on construction.

We have found that despite the challenges, many townhouse owners feel the required attention, investment and time is fully worth it. The renovation is a journey unlike any other residential real estate project in NYC — but the final product is one of history, beauty, and privacy all within a carefully-modernized home. 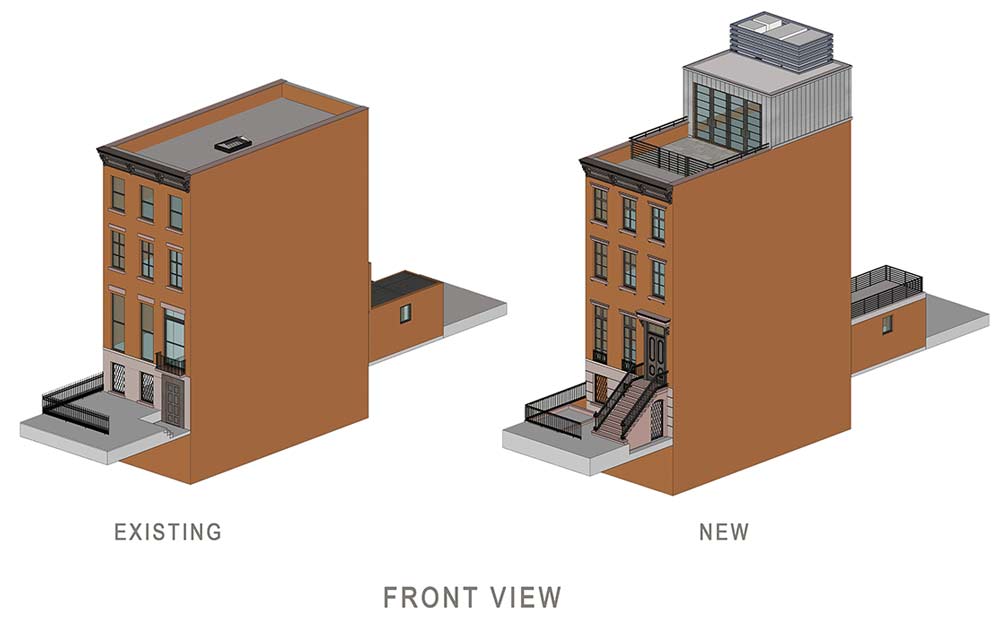 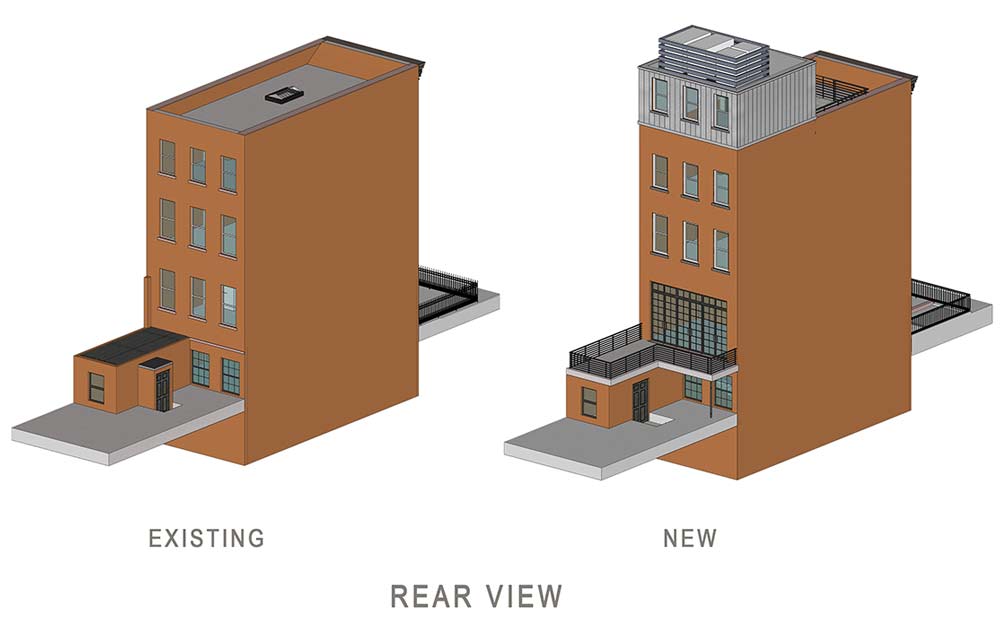 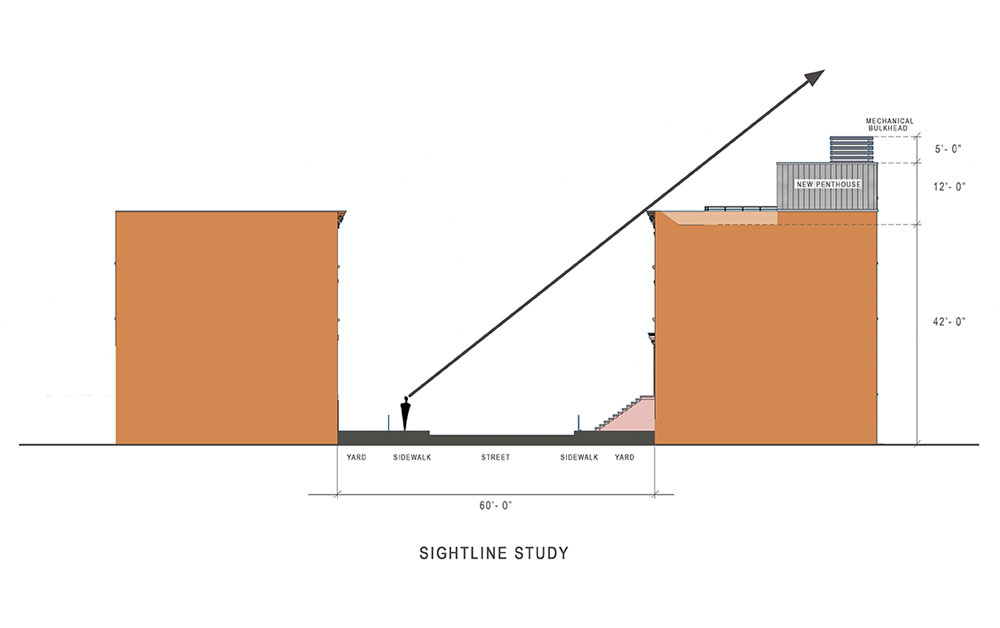 Here is an example:

Every NYC townhouse design we have worked on has its own unique challenges. The client bought the building with the intention of living there and maintaining some of the rental units.
Originally built in 1910 as a single-family residence, the building had been converted into 8 apartments in 1933. At the time of the conversion, they removed the elegant front entry stoop to accommodate a new shared entry for the apartments. In addition, the interior was divided up to create a few studio and 1-bedroom apartments. The building was in poor condition due to years of neglect.

The new owner wanted to convert the basement and first floor apartment into a triplex apartment for themselves and maintain 3 apartments above as rental income for the building. A penthouse with a deck would be added to the top floor apartment to make it into a duplex. They also wanted to restore the front stoop as the main entry into the building. 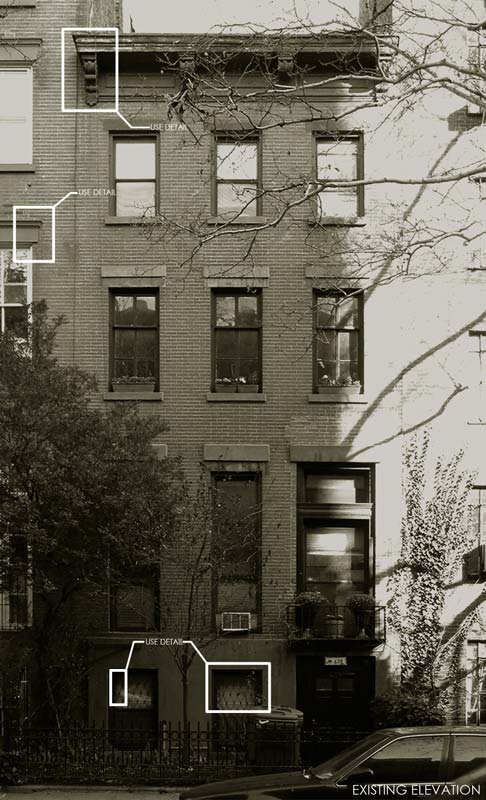 We also renovated the building’s common corridors and installed a large set of metal and glass French doors leading onto a new rear deck. The rear French doors were a challenge because we needed to install new steel support channels in order to remove most of the brick veneer on the first floor.

The building is located in an R7B Contextual Zoning District as well as the Chelsea Historic District. 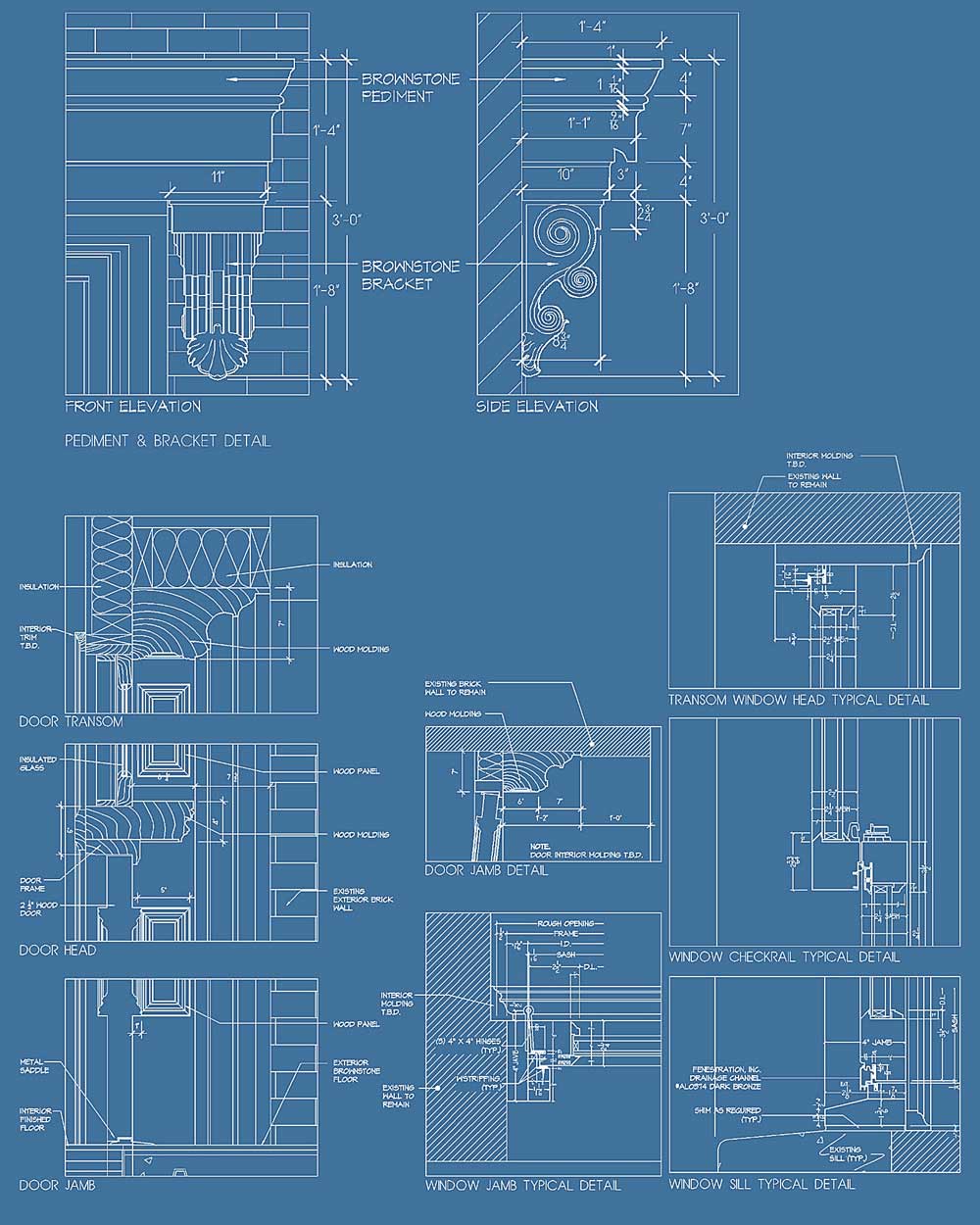 We were confident that we could accomplish everything the client wanted to do including the penthouse and roof deck. The Landmarks Preservation Commission has very strict rules concerning the visibility of vertical additions to buildings in Historic Districts. Since the building is in an R78 District, which is both a Contextual and Height Factor Regulation District, we could easily comply with the zoning regulations. At 44 feet tall, our building was well within the maximum height requirements of 75 feet. We also had FAR (Floor Area Ratio) available. Complying with zoning was not the problem.

There were other structural issues to deal with as well. The existing party wall footings were shallow and made from rubblestone. The additional weight of the penthouse on the walls added extra weight to the building. It would require underpinning the existing walls and pouring new concrete footings. This was not a problem, because we were also completely renovating the cellar to be used as a finished space. Another structural issue was installing a steel framework above the roof for the deck, so as not to affect the apartment below. We have done all these things on buildings before. Work like this is intrusive and expensive, but still doable.

In order to add the penthouse, restore the stoop, add decorative brownstone ornamentation, decorative metalwork, rear French doors and HVAC units on the roof and a rear deck, we needed to present our proposal to the Landmarks Preservation Commissioners at a public hearing. They are the only ones who can approve large scale changes to buildings in Historic Districts. We have over 30 years of experience in working with Landmarks, and based on that experience, we know how to work in our client’s best interests.

To add the new 12-foot-tall penthouse on the building, we would have to make sure that it was set back and not visible from the street. We used sightline diagrams showing compliance as part of our presentation at the Landmark’s public hearing.

We have done penthouses and roof decks on large and small buildings in both landmarked and non-landmarked parts of New York City. In this case, even though there were significant hurdles, we showed how the penthouse could be approved and built.

The project was unanimously approved and we moved forward without delay. The penthouse and roof deck will be done in phase two of the project.

The entire building was renovated and modernized. We had a fantastic team of contractors and crafts persons who contributed to the high quality of the work that was done. The client moved into their new triplex apartment, and the front and rear were landscaped. As a result, the building has won numerous accolades for its design and beautiful historical restoration.